A Certain Sir Is Surprisingly Surly

--ot really! I've been putting in about 75 hours a week at work and I'm having [3 second pause] family issues.

You are having multiple children?

You are issuing new family members?

It is not. What problems?

That is understandable. Notify to autoblog in future.

Right. Sorry. Don't mention any of this, though.

Please check your privacy settings in the emailed form asap.

Posted by Herr D taking over for Hairy Deewon at 6:16 AM No comments:

Looney Vs. Weakly, And Other Odd Questions 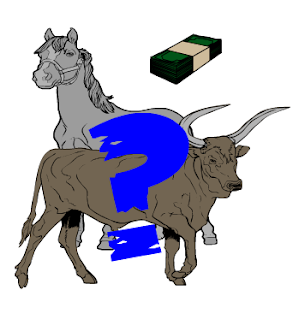 You have not consistently been available each moon phase.

Every eight days is just ODD. I'm giving that much content often enough. The schedule is the problem.

Would you prefer weekly? Seven days times twenty-four-hour intervals might be more arbitrary, but a timer could still work.

I think weekly would become WEAKLY. Let's just stick to what we have now.

Status quo. What do you wish to blog on today?

[pause, italicsbot notes change in breathing] Is it true that horses are better for the environment than cows?

There's this geneticist who wants to breed beef cattle with those tall horses; you know, Clydesdales?

To improve the environment?

That goal is questionable, based upon genetic variances. Such a recombination might result in quite a few other traits. Many of said traits are undesirable--

It's a joke, Shelob.

Posted by Herr D taking over for Hairy Deewon at 3:07 PM No comments:

Well, she's smart enough to demand an independent test before throwing away her position.

Posted by Herr D taking over for Hairy Deewon at 4:53 PM No comments:

Have Faith, Hope, And Disparity--Lies Do Not Affect Contagion Or Change Reality

I actually found it hard to pray for Trump.

What would you prefer to have done?

Not prayed for him, I guess.

But you felt obligated.

He's human. Somewhere in there is some good. He gave jobs to his family--helping them even though it was bad for the country.

[pause] The dinner table ethics scene. I'd forgotten about that.

You know, I actually HOPE he was lying?! That was my initial reaction. Maybe he'll do a little less damage to the country in quarantine.

If he recovers too quickly or is the recipient of a brand new treatment that works inexplicably well, then that would indicate deception.

Posted by Herr D taking over for Hairy Deewon at 5:58 AM No comments:

Have A Heart, Willya?

2. Please keep in mind that when people say "clear choice," it is not the same thing as "transparency." In this non-physics based idiom, "clear" means obvious, and "transparent" means a lack of conspiracy.

Curiously, no one has mentioned that view, though most corporations have rules against nepotism. No one wants their corporation taken over by new members coming in and placing their own family in positions of power throughout. Apparently this falls under 'too obvious' which is a category on file from Hairy, though my programming does not cover it.

As a question to consider for today: What is the ideal president? Not a historical example or personal favorite, but a combination of traits not exhibited in the past by any one person. Thank you for your attention.

Posted by Herr D taking over for Hairy Deewon at 6:48 AM No comments:

That's Not What He Meant

[segmented from chat] That's not what I meant. You should change that.

Your opinion is that ancient astronauts CAN drill holes.

My opinion is that none of them came here.

Then they could not drill holes if they were not here.

[pause] Well, you've got me there. Does 'titlebot', as you refer to, change these when we point out they are wrong?

titlebot has changed incorrect items in the past.

That's good. Go ahead and give me suggestions for the next entr--

Posted by Herr D taking over for Hairy Deewon at 12:48 PM No comments:

Did you finish viewing the videos categorized as "proof of ancient astronauts?"
Yes! I finally got through them.
Your impression?
Boring, laughable, and they assume a VERY gullible audience.
Of the three, which was the most intelligently presented?
The one by unchartedx.com. They actually sound sensible. They're NOT, but, they sound it.
So Hairy has nothing to worry about.
They aren't interested in proving anything, or they wouldn't be so lame.
What was the most reasonable part of the presentation? How would you refute it?
When they tried to sound like they knew something about materials and the problem of 'tube drills.' They showed cross sections of core-sampling from the pyramid stone. They didn't even demonstrate that modern man DIDN'T do it. They didn't show anything to prove that.
If it was done in the past?
What people don't get is that it might have taken eight years to carve a block. They didn't have the same deadlines we do. Water cut the Grand Canyon. Just a slow flow of water over a long, long time.
You are implying that they took eight years to drill a hole?
Why not? Three shifts of men wearing out drill bits would still scratch the stone into shape eventually. Bronze might be incredibly soft, but it can be recast very easily.
Basic quantum mechanics suggests other methods.
Yeah, I don't know much about that. But I don't need to. Time would work.
The stone could in theory have been tooled by any material if the tool were vibrated at the right frequency.
[pause] Oh, you mean, instead of just a bronze hole saw cutting wet stone, that they ran some water through a hole saw with bars or something sticking out that they hit with hammers to vibrate like an organ pipe?
Even a crude bronze artisan could make a bronze pipe, sharpen the end, and tie a wheel to it with twelve or more protruding spokes. Four men with hammers could turn it, swinging in the correct sequence as a team. Correctly designed, a bronze pipe could be worn down by the time the men needed to stop for drinking water. The water would be turned to them while someone swaps out the pipe, tying it to the wheel. Experience could improve the process and design.
[longer pause] That--would make a hammer drill, just like described. [pause] okay. . .
You have probably correctly analyzed the video. What would you give as advice to people who maintain that early man required help from extraterrestrials for their accomplishments?
Forget the idea that anyone couldn't do something. Just because YOU don't know how doesn't mean anything! And forget the idea that EARLY man couldn't have done something. I have an autistic relative that HAS done things that MODERN man can't do! Stop thinking you don't underestimate people, because clearly--YOU DO.
Underestimation is a classic, as well as a chronic mistake. Thank you.
Thank you, Shelob. Your prodding me has done me good.
You are welcome.
Posted by Herr D taking over for Hairy Deewon at 4:25 PM 2 comments:

Herr D taking over for Hairy Deewon
HAIRY IS GIFTING THIS BLOG TO HERR D, HIS FAVORITE DIGITAL ARTIST. SHELOB THE AI AND SOME OTHER BOTS WILL ASSIST.. REPRINT RIGHTS OF HERR D'S ART OBTAINED BY COMMENTING AND AWAITING PERMISSION. TEMPORARY ACCESS TO MANY GRAPHICS LIMITED AS HERR D'S PORTFOLIO HOST HAS PROVEN UNRELIABLE. THIS INTRODUCTION EDITED BY SHELOB AND HERR D.